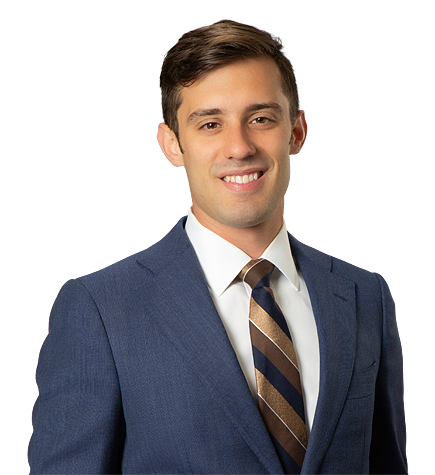 Tate Harshbarger is an associate in the Litigation group. While attending UCLA School of Law, Tate served as an extern for the Hon. Frances Rothschild of the California Court of Appeal for the Second District and was an extern for the Federal Trade Commission.

Additionally, he served as editor in chief of the UCLA Law Review, was a member of the UCLA Moot Court Honors Program, served as business editor of the Pacific Basin Law Journal and volunteered with Bet Tzedek and Public Counsel, among other activities.

While pursuing his M.Sc. in Public Economics at Durham University in the United Kingdom, Tate received the award for Best Academic Performance in his program and was honored with Distinction for his dissertation on labor income elasticity. He earned a B.A. in Economics from Yale University and was a walk-on running back for the Yale football team.